My Journey to Becoming a Lactation Consultant 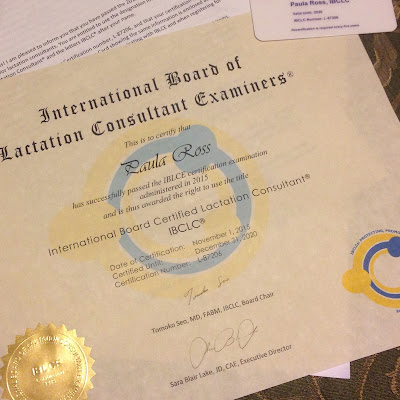 When I stumbled into motherhood for the first time at age 20, I didn’t even consider breastfeeding. I remember being asked “breast or bottle?” by the nurses at the doctor’s office and the hospital. I remember reading materials from the doctor’s office that indicated there must be some women out there who fed their babies from their breasts. But I didn’t personally know any of them. All my friends and all the adult women I knew bottle fed. (I still didn’t think of my friends and myself as “adults.”)

When I had my second baby, as a 27-year-old RN by that time, I had learned more about the benefits of breastfeeding, and my friends had begun to breastfeed their babies. I hesitantly told my husband that I was thinking of breastfeeding, uncertain of how he would feel about it. It turned out his own mother had breastfed him and his five siblings, and he assumed that this was what I would do. We attended a breastfeeding class together at the hospital where we both worked, where I was given the advice to feed for 10 minutes on each side. That class was my only breastfeeding education. It seemed totally natural to breastfeed, and I assumed that after she was born, I’d put her to the breast, and she’d eat.

My beautiful baby girl, MJ, was placed on my chest by the doctor immediately after delivery. The nurses rubbed her vigorously as they dried her off, for although she appeared pink, she did not cry for several minutes, and her first cries were weak. I felt stunned myself—the epidural seemed to affect me systemically rather than locally, my blood pressure had dropped very low, and the anesthetist hung out in my room monitoring me for awhile afterward. I suspected the medication affected her. Although she was placed skin-to-skin with me initially, she was taken to the warmer for exams and tests before being brought back to feed. I was relieved when she latched on and suckled. THen for the rest of the night, it was hit-and-miss. When it began to hurt, the nurse gave me a nipple shield. Although I was offered a Lactation Consultant visit in the hospital, I did not get to see one.

Once I got MJ home, I had trouble getting her to wake up and eat, and it worried me. I began pumping my breasts with a manual pump that I had bought at Wal-Mart, and I fed her what I pumped with a dropper. My only support or knowledge during this time came from what was available on the internet in 2001 and from my dear friend Andrea, who had breastfed her three girls. MJ eventually became more alert and latched on, but my nipples quickly became extremely sore. Andrea came over to check my latch and give me pointers. And then MJ began spitting up large amounts immediately after her feeds. At her first pediatrician visit, at 2 weeks old, she had gained about a half a pound over her birth weight, and the doctor was not at all concerned about her spitting up. But I was still concerned. The amount she was spitting completely soaked her clothes.

Then MJ became very fussy. She cried almost constantly, and I wasn’t sure why. Was she hungry? It seemed like she was constantly wanting to nurse. Was I over feeding her? I spent my days wearing her in a sling, vertically against my chest. Walking back and forth through the house seemed to soothe her. To say this was a very difficult time for us would be an understatement. I felt like I was failing at breastfeeding and failing at being a mom. I read as much as I could on the internet, deciding to eliminate dairy from my diet, but it didn’t seem to help much. At each pediatrician visit, I would mention her crying and spitting up, only to be assured that “some babies just do that”, and each time, he recommended thickened formula.

I had gone back to work in the meantime, working the day shift in a busy Labor & Delivery unit, and I could often only pump once in a shift. The hand-held pump was still the only pump I had. I didn’t get very much milk when I pumped, and we resorted to soy formula to make up for what was lacking. MJ continued to be very fussy and continued to spit up after every feed. At her 4 month pediatrician visit, the doctor sent home with me a can of thickened formula. Shortly after that, I began feeding it to her, and then I stopped breastfeeding altogether. The thickened formula did not help her spitting up and fussiness, and neither did soy formula. But my supply was gone, and I did not think I could get it back. Breastfeeding was just over, and I was sad about it. The first time I fed her from a bottle broke my heart. My husband and I were involved in Couple-to-Couple League at the time, an organization that encouraged ecological and extended breastfeeding. All the other women at the meetings breastfed their babies and toddlers. Although the ladies were very kind and not judgmental in the least, I still wanted to sink into the floor when I pulled out our bottles of formula.

When I was expecting my 3rd baby, a cuddly son, I began attending La Leche League meetings in the 3rd trimester. I read books on breastfeeding. I saw a Lactation Consultant in the hospital. Armed with support and knowledge, breastfeeding him was a completely different experience. It was so easy and convenient that we continued until after he turned two, weaning during the first trimester of my 4th pregnancy. My dream of someday becoming a Lactation Consultant had been born. All of my children since then have been breastfed, weaning between a year and 18-months-old. For some of them, I’ve had to eliminate dairy, and I had supply challenges with the last two, but all of them grew and thrived on my milk.

Reflecting back on my experiences has taught me a few things about breastfeeding support. Although I sometimes wish I had known more about breastfeeding before my oldest was born, I believe that at the time, I would not have been receptive had the information been presented to me. I was at a completely different place then. Formula feeding was what I wanted to do, and I felt no guilt over it.
With my second child, I believe I did the best I could with what I had at the time, but it wasn’t what I wanted to do. When I reached out to our pediatrician for support, I felt dismissed, like my concerns were unimportant. I struggled for the longest time with feeling that I had failed. That baby is now a healthy, beautiful, intelligent 16-year-old. Even though I didn't feed her the way I planned, I didn't fail.

I wanted to become a Lactation Consultant, not to convince the world to breastfeed, not to wage war on formula feeding (I'm thankful formula is there when we need it!), but to support those who struggle, to help find a solution to those struggles if a solution can be found, and most of all, to be the one who listens.

If you need breastfeeding support and you are looking for a lactation consultant in central or south Arkansas, call or text me at 501-436-8525.
No comments:
Email ThisBlogThis!Share to TwitterShare to FacebookShare to Pinterest
Labels: breastfeeding, our stories
Newer Posts Home
Subscribe to: Posts (Atom)